What silent desert are the two Situationist cowboys crossing? It brings to mind Baudrillard’s now-famous description of the essence of our time:v”the desert of the real” (and for good reason, too – Baudrillard himself exists in the Situationist current, stretching Debordian logic to its necessary breaking point). The phrase reached mass circulation when it was spoke to Neo, the protagonist of The Matrix, to reveal to him the technohorrors of true reality: “Welcome to the desert of the real.” In this guise, it was resurrected again by Slavoj Zizek in a 2002 essay on the September 11th attacks, but this time it was being spoken to not a fictional character but to the West as a whole; for Zizek, the images of the collapsing towers pulled back the curtain of the “theatrical spectacle” that obscures the Real and exposed everything for what it really is.

In both cases, reality is an illusion, an image that hides the fact that we exist in a desert that is always there, ever present, just beneath the surface. We’re reminded of Sergio Leone’s spaghetti western films: in The Good, the Bad, and the Ugly and Once Upon a Time in the West (among others), America is mythologized to the point that it no longer resembles America. The stand-ins for ‘America’ are dreamlike in quality, the arid geography nonsensical.

Baudrillard’s desert of the real concerns itself with cartographies and territories. He draws our attention to a fable of Jorge Luis Borges – the mapmakers of an empire create a map with such a level of precision that that map itself covers the entire territory; the territory itself becomes the map. As the empire declines, the map frays and crumbles – but it is in the desert where remnants can be found, its “metaphysical beauty of this ruined abstraction testifying to a pride equal to the Empire and rotting like a carcass…”

Painting this picture, Baudrillard with have nothing of it. Great empires are a fiction of modernity and pre-modern times; we can only speak of Empire if we follow the route of Negri and Hardt (something we may very well do).

If Borges’ fable can no longer work for Baudrillard, it’s because the relationship between the map and territory have changed. “The territory no longer precedes the map, nor does it survive it. It is nevertheless the map that precedes the territory.” The territory is what obscures the map, and under its rotted fringes the desert of the real has been exposed. Our drifting cowboys move across it – who haunts deserts, other than nomads?

What created this reversal? Surely it wasn’t capitalism; as a long-standing historical system, market economics have thrived on mapping maps of territories that became their own, through the expansion of empires and the processes of colonization. Instead, the answer lies not in the transition from some proto-capitalism to capitalism proper, but shifts in the methodology of capitalism itself. What we now call neoliberalism – global market integration without imperialist mobilization – is a new incarnation of the market; its origins can be tracked to worldwide paradigm shifts that occurred throughout the 1970s and 80s. Baudrillard imploded Borges’ parable in 1981 with the publishing of Simulacra and Simulation; his work, essentially theoretical cyberpunk, is a symptom of this transition.

This transition’s format is nothing less than the transition from modernism to postmodernism. We use these terms not strictly in senses of aesthetic evolution or literary theory, though the terms certainly encompass both. “Modern” and “postmodern” refers primarily to the underlying logics of production – the vague change from one to another reflect broad and sweeping alterations in these logics. By the same token, it is prudent to approach postmodernism first and foremost to a field that may very been one of the first to employ the term: architecture. Charles Jencks, a historian of the field, pinpointed the moment of the transition as occurring at 3:32 PM, July 15th, 1972. It was at this time that the Pruitt-Igoe, a government-subsidized housing project in St. Louis, was demolished; a modernist architectural wonder at its competition in 1955, the 33-building complex rapidly disintegrated, its structure decayed, its apartments vacant and its corridors overtaken with crime. The project had launched at the dawn of the fifties with a pledge by government to pull up the urban poor from lifelong toil in the slums: “We must rebuild, open up and clean up the hearts of our cities. The fact that slums were created with all the intrinsic evils was everybody’s fault. Now it is everybody’s responsibility to repair the damage.” These words were spoken by the mayor of St. Louis, Joseph Darst, in 1951. By the time modernity was at its close twenty years later, Pruitt-Igoe resembled Pripyat.

Pruitt-Igoe’s style – rectangular building shape, combinations of high-rise and mid-rise structures, ‘common spaces’ to foster sensations of community, emphasis on order and symmetry – was fixed squarely in the modernist architectural tradition. Pruitt’s architect, Minoru Yamasaki (also the designer of the World Trade Centers), operated in the guiding principles established by Le Corbusier and his International Congress of Modern Architecture (CIAM). When Jencks assigned modernist architecture to the scrap heap with the collapse of Pruitt-Igoe, he was stating that the Le Corbusier approach to planning was defunct – but leaving it at that was a gross simplification. It constituted a symbolic death of an ideology.

“Authority must now step in, patriarchal authority, the authority of a father concerned for his children… We must build places where mankind will be reborn. When the collective functions of the urban community have been organized, then there will be individual liberty for all. Each man will live in an ordered relation to the whole.”

The above are words Le Corbusier, born Charles-Edouard Jeanneret in October of 1887. Before his death in 1965, Le Corbusier (a name adopted in 1920s) revolutionized the field of modernist architecture, establishing its central philosophical tenets aesthetic formulations. His outlook on the world closely resembled that of the Italian futurists: mankind’s destiny was built around technological form, a celebration of speed and war. Also like the futurists, whose fascistic tendencies were no secret, Le Corbusier’s entire oeuvre was a joyful hymn to hierarchy, command, centralization, planning. He projected the future as a place where everyday life would managed from up on high; architecture and urban planning were to celebrate this order while simultaneously serving the needs of a managerial elite. In this sense, Le Corbusier’s articulation of the urban landscape fits quite closely to the Situationist critique of the city; the difference is that while one party moved themselves against, the other dedicated their life to fostering it.

The contributions of Le Corbusier and his followers is a virtual roll call of authoritarian cityscapes – the majestic Palace of the Soviets, doomed never to be built, is counted among his projects; he served as consultant during the construction of the United Nations headquarters. He lobbied the League of Nations to adopt international architectural standards based on his vision and lectured in Italy at the behest of Mussolini. His colleagues designed Brasilia, the Brazilian city crafted from the top-down – an intended utopia, it transmutes Soviet modernism into a stark portrait of the future, devoid of public life. In each case, Le Corbusier is attracted to the seats of power, be it bureaucratic Bolshevism, statist fascism, platforms for international ‘co-operation.’ At the same time, his individual political beliefs – at least under what systematic classification they would be assigned to – are vague; there is little to call Le Corbusier other than a High Modernist. Writes James C. Scott of the architect’s schema,

“… the place of each individual in the great urban hierarchy is spatially coded. The business elite (industrials) will live in high-rise apartments at the core, while the subaltern classes will have small garden apartments at the periphery. One’s status can be directly read from one’s distance from the center.” (Scott, Seeing Like a State, pg. 115)

This regimented city, the brain of society, is governed at its center not only by the industrial magnates but by “a modern philosopher king who applies the truths of scientific understanding for the well-being of all.” It is tempting to see this as an allegory not for iron-fisted authoritarianism (though Le Corbusier obviously had no qualms in engaging with such philosophy), but for the enlightened liberal democratic state, the sovereign entity that rules for the people and protects them. The integrated society, the glorification of hierarchy, enfolded in the governance of the nation. This is illustrated in Brasilia, where there exists the Plaza of the Three Powers, a vast, open space at the center of the city, surrounded on its sides by the government’s ministries. 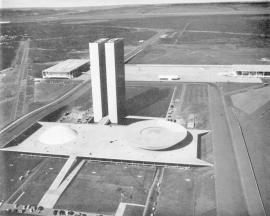 Scott: “This plaza is a symbolic center for the state; the only activity that goes on around it is the work of the ministries.” (Seeing Like a State, pg. 121)

We can now see the symbolic register of the Pruitt-Igoe demolition and the closing of modernism: true, it is the book shutting on the Le Corbusier architectural current, but what about the greater implications. Pruitt-Igoe failed as a social experiment; liberal democracy’s dream of welfare and aid to the poor collapsed under its own economic weight. Instead of utopian dreaming, it bred crime, disease, micro-collapses. Lyotard tells us that for him, postmodernism can be simplified as “incredulity to metanarratives” – metanarratives (or Grand Narratives) being to total worldviews that claims to master or hold the key to knowledge, reason, the methods through which the world works. Hegel’s dialectic, Marxism, humanism, liberal social democracy – all of these constitute Grand Narratives. At least one of these died a symbolic death in Pruitt-Igoe.

1972 marked the transition point not only in economics – it also marked a transition in the role of the government. Deregulation was on the horizon, and beyond that, the dismantling of the New Deal. This is a false dichotomy, however: there is no separation between the transformation of the state and the transformation of economics; they are two complementary processes. In order to fully understand modernism’s liquidation into postmodernism (and its meanings for resistance), the narrative strands of each must complement one another.