A brief thought on the futures of capitalism

The story has been retold again and again: the passageway into the Control Society was marked first and foremost by the shift from an industrial-based capitalism to one dominated by the complexities of financial markets, a shift itself driven by a remarkable coalescence of micropolitical exodus, systemic crisis in Keynesian-Fordist governance, and the rise of cybernetic computational technology. This financial turn, one that is communicative and semiotic in nature, triggers a reformulation of the basic structures of capitalism’s organization: as a multiplicity of new vantage points to view the market arose, each focusing on a different aspect of its shifts and complication, organization decentralized and replaced hierarchical command chains with connected yet functionally autonomous knowledge networks. Further mutations to network formations came with the dispersal of production across the globe, requiring the new technological developments to be put to use to coordinate the actions of a truly transnational system that operated beyond the traditional boundaries and binaries of the previously hegemonic state blocs.

In the developed world, this all meant that the logic of capitalist accumulation had to shift from pure labor itself to consumption; tracking of the reverberations from consumptive cycles move rapidly upward through data collecting and processing chains, reaching their culmination in the dances of the stock market captured on the computer screens of the traders and bankers in the world’s financial districts. What these individuals are seeing on these screens is essentially the techno-biological vital signs of a living creature that is composed of each and every one of us, a living creature whose breaths and heart beats are semiotic registers of our own captured desires externalized in the visceral experience of being immersed in a modeled and controlled consumer marketplace. The never-ending spectacle of consumption is the grand mediator of our social life, the DNA of our productions of subjectivity; thus the global organism of market is a reflection of who we are rendered into a purely machinic array of information signs. Our bodies disappear and then are re-actualized in torrents of data, and Foucault’s panopticonic utopia dissolves into a state where every movement is believed to be calculable and predictable.

Like its Keynesian predecessor, financial capitalism is wrought with crisis, yet there are no signs that we are going to hit the reset and go back to an earlier stage of capitalism or advance to a new machinery of exploitation. Instead, against all logic, there is a global effort to instead accelerate the neoliberal form, particularly in the ongoing rounds of austerity that continually erode any idea of a public sphere. Still, technology continues to undergo its own rapid and unpredictable mutations, and these will alter the path that this acceleration will follow. One of these is what the Economist is calling the “Third Industrial Revolution,” at the heart of which is the 3D printer. A design model on a computer can now be used to manufacture an item without ever having to grace the factory’s floor, or even enter into an engagement with the corporation that owns the factory. With this advancement, the supply chain that is so critical for capitalism as we currently understand it is thrown into disarray as the gulf between material and immaterial labor is eliminated. “None of this makes sense,” writes the Economist, and it is true: there still exists a diminishing middle class, clinging to the jobs provided by the manufacturing sector, that are undoubtedly in for turbulent times as this technology spreads. At the same time, there is also the manufacturing corporations and the larger corporations that own these that are facing equally stormy weather. 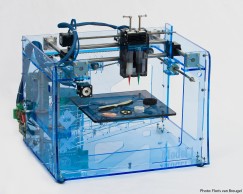 As for the financial sector, their own future may look very different. Despite a move towards an interdisciplinary space where economics rubs shoulders with sociology, psychology and speculative chaos theory, the cybernetic technology that gives the traders and banker the ability to watch the fluctuations of the transnational mediated subjectivity is still very classical computational technology. The flow of data, the streams of tickers and shifting tables, charts and digitalized movement is constantly updating, changing minute to minute, second to second. Yet on the horizon is the ‘beyond’ of these information machines: the quantum computer. Basic computers as we have now operate in basic binary logic; simple tasks occur in rapid series. A quantum computer, on the other hand, does not to follow the paths of binaries built of ones and zeroes. Instead, it will employ “qubits” which, following the strange logic of quantum theory, can exist simultaneously in multiple states. It works by encapsulating the ones and zeroes and moving past them, allowing an exponentially higher speed of calculation – millions upon millions of potentials of any situation can be juggled and analyzed all at once. The importance of this is clear to anyone in finance working on the modelization of markets: the computer can sort through the sheer chaos of contemporary capitalism in ways that classical computers never could. Granted, it is still impossible to predict the future with any kind of computer, real or theoretical, and surveying the market still doesn’t provide insight into those little bits of subjectivity that evade statistical logging or control.

We’ll soon see the proliferation of both of these machines (though the 3D printer is far more immediate than the quantum computer), and a great many more that deserve in depth scrutiny. As we analyze our present and past, we must continue to keep one eye squarely on the future and ask what these things mean for all of us.

14 Responses to A brief thought on the futures of capitalism