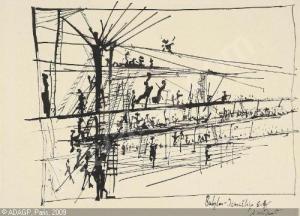 Starting in 1959, Constant Nieuwenhuys embarked on a project that would nearly consume two decades of his life. Cobbling together models, sketches, writings, and other visual mediums, Niewenhuys, an early member of the avant-garde CoBrA movement and a later Situationist, posed his idea of “New Babylon” – a realization for the post-capitalist world in the form of a global ‘drift city.’ New Babylon was to cover the entirety of the earth’s surface; suspended in the air, the interactions of this massive urban space would form a sort of shell around factories driven by automation and cybernetic technologies, innovations that would ultimately liberate humanity from the horrors of labor. 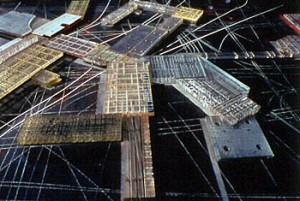 Nieuwenhuys conceived New Babylon to be an endless array of networks that would be mutatable: with being tied down to the factory or bureaucracy, individuals could endless drift or wanders through its spaces, and would be fully invested with the capability of transforming the architecture itself. Through these nomadic movements and interaction with the environment, New Babylon would be forever shifting, always manifesting itself into new experiences. In keeping with the Situationist’s style of libertarian Marxism, the “citizenry” (for lack of a better word) of New Babylon would lose any sense of attachment – bourgeois and humanist constructs of the social, family life and belong would be obliterated in an endless voyage through the realms of desire. As these things dissipate from the human condition, the nomadic New Babylonian would lose his or her sense or time, and eventually even the sense of self through the loss of memory.

Nieuwnhuys’ concept seems to anticipate in many ways the schizoanalytic project of Deleuze and Guattari, particularly in its earlier form, Anti-Oedipus. In both, politics of desire are foregrounded,with a strong emphasis on nomadism, circulation, mutation, processes of becoming. Yet Nieuwnhuys, by the end of his project, would despise his idea of New Babylon. In the aftermath of May ’68, the rise of the Vietnam War, the crises of governability in the 1970s and the transformation of capitalism from its state-centric Fordist-Keynesian form to an abstract machine that, like New Babylon itself, had begun to cover every inch of the globe, Nieuwnhuys’ apostasy made him realize that the unbridled loss of the self and the social would be the highest form of horror; what began as a utopian dream, for him, would manifest itself as the highest form of dystopia. Bourgeois norms and morals and outdated humanism surely were artifacts to be swept away, but New Babylon itself could easily become a cult of the self in ways that capitalism has aspired to (and perhaps has reached) – without the sense of community, what then would be the point of liberating the self from iron cage of its conditions?

With that in mind, I would like to pose a few thoughts on the relevancy of politics of desire and nomadism, particularly at a time when it has been worked into the accelerationist currents that seem to urge on, in both the classical and Promethean strains, the worst of capitalistic excesses.

5 Responses to Desire and Care