The Formula for Overthrowing the World 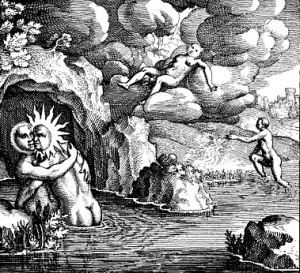 “The Hacienda must be built” – Ivan Chtcheglov, Formularly for a New Urbanism

“From Ivan Chtcheglov’s 1953 essay “Formulary for a New Urbanism” with it’s references to Campanella (“there is no longer any Temple of the Sun”) through to Debord’s recent writing, the Situationist circle has been obsessed with the occult, mysticism and secret societies… The “Here and Now” [Post-Situationist journal] editorial board appear to be suggesting that the SI emerge from three different traditions: one artistic, one political and a third which is largely ignored – that of the occult and secret societies.” – Stewart Home, “Introduction to the Polish Edition of The Assault on Culture“

“I was always interested in ancient cultures, the Egyptian, the Sumerian, the Central American and Jewish cultures… cultures that have left traces in our memories, from magic to religion to fanaticism,” said Ettore Sottsass, an Italian architect, designer, and member of the notable postmodern Memphis Group in the early 1980s. “Technologies of life which are not always rational, like those of the East, which progress by constant training of the body and mind.” Sottsass had also been associated with the Archizoom collective, a coterie of artists and architects dedicated to crafting the superarchiterrura – an “architecture of superproduction, superconsumption, superinduction to consume, the supermarket, the superman, super gas” achieved through the combination of mass production techniques with Pop Art. Over a decade earlier, however, Sottsass was a member of a tight-knit avant-garde group called the International Movement for an Imaginist Bauhaus, formed by Asger Jorn as a counterbalance to the art’s ideology equating beauty with functionality. In 1957 Imaginist Bauhaus merged with the Letterist International, led by Guy Debord, and the London Psychogeographic Association to create the Situationist International. Sottsass would exit the organization at this point, but, Stewart Home insists, “his attitudes are typical of those who belonged to the SI, even after the movement split into rival ‘cultural’ and ‘political’ factions.”

The disparate thread running from the Imaginist Bauhaus to the early days of the Situationist International and through Archizoom and superarchiterrura is a profound reinventation of society, on one hand through liberation of the modes of production in the Marxist sense, and integration of urban spaces with the techniques and imaginative sprawl of the modernist avant-garde. From Constant Nieuwhenhuy’s cybernetic New Babylon to Chtcheglov’s schizophrenic new urbanism, from Debord’s psychogeographical derives to the concept of the Situation itself, the central ambition of this revolutionary program is the building of a new societal environment oriented not towards labor, consumption, being, and wok, but the ludic – spontaneity, playfulness, imagination, and experimentation. It is nothing less than the Great Work, the succession formula used to “alter the face of the world.”

This description comes not from the Situationist’s journals, manifestos, and tomes, but from Eliphas Levi, the famous French occultist.

To what extent did the world of hermeticism play a role in shaping the Situationist approach, as Stewart Home insists, and importantly, does this matter? Given the impact of both this group on the networks of radical (post)political movements and organizations, be it May ’68, the Dutch Provos, the German Kommune 1, the Italian Autonomia, various insurrectionary anarchist groups and theorists, and the alter-globalization’s frequent usage of carnivalesque tactical frivolity, it seems to me to be a history worth considering, but one difficult to trace, pin down. Jean-Marc Mandosio’s work In the Cauldron of the Negative does just this, looking at the tension between Debord and Raoul Vaneigem’s approaches to revolutionary theory as well as the latter’s interest in alchemical symbolism and allusions.

In Vaneigem’s The Revolution of Everyday Life, the ludic takes the form of poetry, but this poetry is not to be confused with poetry as we commonly think of it is. Instead of words, this poetry is an active force capable of generating transformative energies; looking at Vaneigem’s earlier writings, Mandosio traces this viewpoint to the Surrealist’s utilization of poetry as expounded upon by Andre Breton. “The alchemy of the word” is a phrase that deeply interested Breton, commonly attributed to Arthur Rimbaud but found in the writings of alchemists from the Middle Ages. Breton surely sensed this, being steeped in the writings of Nicholas Flamel and Eliphas Levi. “The alchemy of the word,” for these pre-scientific tinkerers, was a reference to the “balance of letters” – “a theory of universal measure, which seeks to make all the data of human knowledge the object of an exact science” through which one takes an active part of creation. Vaneigem’s focus on poetry, Mandosio argues, elevates the process of making revolution to alchemical transmutation. Just as the hope was to transform base metals into gold, revolution is a creative act that will be the vulgar material of contemporary everyday life in the ludic utopia. There is no conjecture in seeing this trajectory, as Mandosio points out. Vaneigem himself wrote that “the laboratory of individual creativity transmutes the basest metals of daily life into gold through revolutionary alchemy.” This is further connected to the economic analyses done by Marx: here, revolutionary action is the modification to the modes of production and economic distribution through the combined will of the proletariat as a historical driver. But for the Vaneigem – and the Situationists as a whole – this is simply a shifting of banalities that leads to bureaucratic collectivism and deginerated worker’s states such as the Soviet Union and China; these entities, both Debord and Vaneigem argued, are merely perfected forms of the capitalist modes of production. Instead, the essence of revolution is nothing less than the wholesale transmutation of reality itself. In this quest, Debord wrote, the Situationists were like knights in search of an “evil Grail,” found only by those who dare wander, drift, derive in the wasteland.

Mandosio’s entire work is certainly worth reading in full, if for anything else a much different portrait of the Situationist International than is commonly presented. Also of interest in Benjamin Noy’s comments on the book, which looks in particular at the elements of prometheanism present in the Situationist tendency.

7 Responses to The Formula for Overthrowing the World