De Chirico remains one of the most remarkable architectural precursors. He was grappling with the problems of absences and presences in time and space.

We know that an object that is not consciously noticed at the time of a first visit can, by its absence during subsequent visits, provoke an indefinable impression: as a result of this sighting backward in time, the absence of the object becomes a presence one can feel. More precisely: although the quality of the impression generally remains indefinite, it nevertheless varies with the nature of the removed object and the importance accorded it by the visitor, ranging from serene joy to terror. (It is of no particular significance that in this specific case memory is the vehicle of these feelings; I only selected this example for its convenience.)

In De Chirico’s paintings (during his Arcade period) an empty space creates a richly filled time. It is easy to imagine the fantastic future possibilities of such architecture and its influence on the masses. We can have nothing but contempt for a century that relegates such blueprints to its so-called museums. De Chirico could have been given free reign over Place de la Concorde and its Obelisk, or at least commissioned to design the gardens that “adorn” several entrances to the capital.

This new vision of time and space, which will be the theoretical basis of future constructions, is still imprecise and will remain so until experimentation with patterns of behavior has taken place in cities specifically established for this purpose, cities bringing together — in addition to the facilities necessary for basic comfort and security — buildings charged with evocative power, symbolic edifices representing desires, forces and events, past, present and to come. A rational extension of the old religious systems, of old tales, and above all of psychoanalysis, into architectural expression becomes more and more urgent as all the reasons for becoming impassioned disappear.

Everyone will, so to speak, live in their own personal “cathedrals.” There will be rooms more conducive to dreams than any drug, and houses where one cannot help but love. Others will be irresistibly alluring to travelers. 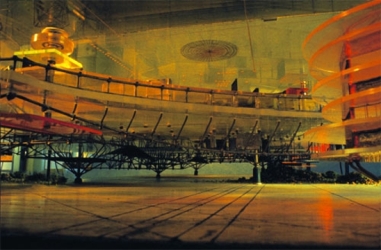 The architect, as with other workers in our enterprise, finds himself faced with the necessity of changing his profession: he will no longer construct mere forms but complete environments. What makes the architecture of today so infuriating is its primarily formal preoccupations. Architecture’s problem is no longer the opposition between function and expression; this question has been superseded. In all use of existing forms, in the creation of new forms, the architect’s principle concern should be the effect that all this has on the behavior and existence of inhabitants. All architecture will therefore be part of a more extended and more complete activity, and finally, like all other arts, architecture will move toward its own disappearance, beneficial to this unitary activity.

The new urbanism will find its first facilitators in the domains of poetry and theater, among plastic artists and architects, in the ranks of urbanists and advanced sociologists. Even in perfect collaboration, however, all these will not be capable of fully realizing our vision. In the end it must be a total effort of everyone alive, for we consider life to be the very material of future creation.

This is a question concerning architecture. An immersion into the imaginary worlds, specifically the fusion of an imaginary world into the everyday real, was the great project of surrealism. The surrealist avant-garde sought to open up a supra-sensory milieu of impossible relations, including monstrous bodies, irrational hybrids, genre mutations, forbidden landscapes and gardens, and a whole range of partial co-located figures and gestures, half real and half other. Surrealism was the promise of a world of alterity and delight, capable of emerging or erupting at the slightest provocation, in the subtlest peripheral glimpse of a disfiguration, and in the recall of the sense and feel of a new space (déjà vu, already sensed). Surrealism is the obverse of modern rationalism, both intersecting but incomplete projects. It is from this call that unrecognized medieval alterity can diversify medieval architectural history beyond the monumental history of differentiated cathedrals (and walled cities)… the disorientation of many medieval thought patterns may read initially as surreal, and for this reason the surreal seems at home in much medievalist thought and practice, not as a totalizing discourse, but as an invitation to an opening. The medieval corpus texts and images are but incomplete evidence of the lure of other worlds of fascination, waiting (like condensation) to appear on the surfaces of this world. Fevers, obsessions, possession, madness, and the emergence of a subsequent Romanticist unconscious—all are exposed as a system by Foucault—even the hysterical absurd Chinese encyclopaedia.