Post-capitalism, Accelerationism, communism and the march of the job-eating killer robots

Two speculative views of what comes after capitalism for those without enough imagination to picture themselves on a beach having group sex. 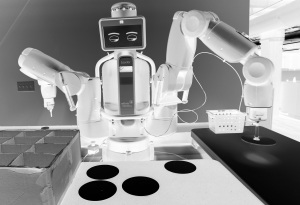 The starting point of these conceptions of life after the class-war, is the now ubiquitous prediction that soon capitalism will no longer…

1 Response to Post-capitalism, Accelerationism, communism and the march of the job-eating killer robots