Crowdwork: Your job is about to get ‘taskified’ 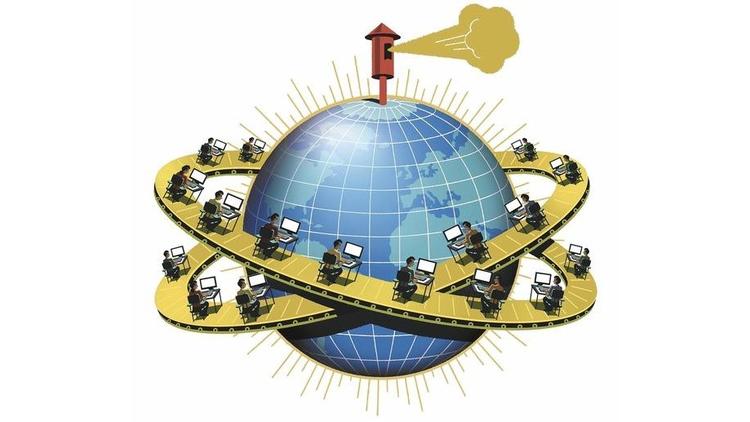 http://www.latimes.com/opinion/op-ed/la-oe-0110-digital-turk-work-20160110-story.html via http://jdeanicite.typepad.com/i_cite/2016/11/crowdwork.html
“”This online piecework, or “crowdwork,” represents a radical shift in how we define employment itself
The individuals performing this work are of course not traditional employees, but neither are they freelancers. They are, instead, “users” or “customers” of Web-based platforms that deliver pre-priced tasks like so many DIY kits ready for assembly. Transactions are bound not by employee-employer relationships but by “user agreements” and Terms of Service that resemble software licenses more than any employment contract.
Researchers at Oxford University’s Martin Programme on Technology and Employment estimate that nearly 30% of jobs in the U.S. could be organized like this within 20 years. Forget the rise of robots and the distant threat of automation. The immediate issue is the Uber-izing of human labor, fragmenting of jobs into outsourced tasks and dismantling of wages into micropayments.
In the U.S. and overseas, crowdwork payments can mean the difference between scraping by and saving for a home or working toward a degree. But as Riyaz Khan, a 32-year-old from a small town in the coastal state of Andhra Pradesh in India, discovered, doing work on spec posted by someone you’ll never meet and who has no legal obligations to you has serious disadvantages.
My team at Microsoft Research spent two years studying the lives of hundreds of American and Indian crowdworkers like Khan to learn how they manage this nascent form of employment and the capriciousness that comes with it. Khan, when we met him, had spent three years finding work on Amazon Mechanical Turk. AMT is one of the largest online marketplaces that connect “providers” from around the world like Khan with “requesters,” typically U.S. or European businesses or individuals. He did tasks for companies as big as Google and as small as neighborhood print shops.
On good days, he made $40 in 10 hours — more than 100 times what neighboring farmers earned. He soon found more tasks than he could complete himself. So he hired locals to work with him out of his living room. In exchange for a cut of their pay, Khan helped his crew create their own accounts, taught them how to complete tasks efficiently, and ferreted out tasks that best matched his workers’ skillsets. He also handled any final queries after the completed task was submitted. They called themselves Team Genius.”