Scrolling through the internet’s back pages, I came across this old Nettime post from 2009 by Florian Cramer urging us to move past the fixation that the art world and activism have with second-order cybernetics, complexity, and the powers held at the edge of chaos. Today we have Galloway and Thacker subverting Deleuze and Guattari with “no more rhizomes,” and as for exit paths from neoliberalism, disparate activities ranging from daily tinkerings to largely hidden subcultures and self-sustaining autonomous zones to the tactics being deployed in Latin and South America seem to hold more answers than some grand and immanent realization of global constituent power arising from transnational distributed network (though I have to admit here that I’m drawing a line between visions of a global society in the Communist trajectory and the very real ability for dissenting segments of civil society to interact and operating alongside each other irregardless of the limitations of time and geographical position). Cramer writes:

The problem… is that second-order cybernetic notions of “chaos”, “complexity” and “self-organization” have been, and continue to be, thoroughly misunderstood in countercultures just because they appear to be identical to their homonymous political and cultural notions. In reality, they are quite if not radically different: The scientific notion of chaos is stochastic-deterministic, the political-cultural notion of chaos is ontological and anti-deterministic. The scientific/cybernetic notion of “self-organization” and emergence is about [nonsubjective, swarm-like] organic phenomena whereas the political notion is completely about social construction and personal intention. In a systems theoretical context, a software cellar automaton or a fractal is “complex”, in a social, political and aesthetic sense, they’re blatantly under-complex.

Unfortunately, these misunderstandings thoroughly pervade the field – and, most importantly: utopias – of “new media” studies, art and activism. I wonder what will be left of it as soon as people wake up and realize that the hopes they put into “open systems that organize themselves” have been just another god delusion.

[See also Brian Holmes’s reply, which stakes out a sort of middle ground]

As part of the ongoing study of the technopolitical dimensions of Control, I returned to the  key sources for so much of the rhetoric about swarming and non-linear patterns of organization, the series of RAND papers put out by David Ronfeldt and John Arquilla, hoping to see just what sources they were citing for this new model of warfare which, as time has shown, has set the precedent for so much contemporary understandings of power and dissent. Ronfeldt and Arquilla make passing references to the Santa Fe Institute, but

more commonly their key reference point is, perhaps surprisingly, Kevin Kelly’s Out of Control: The New Biology of Machines, Social Systems, and the Economic World. Kelly, of course, was perhaps the prophet of the “California Ideology” – he was the editor of the later issues of Stewart Brand’s Whole Earth Catalog and later the Whole Earth Review; following this, he assisted Brand in developing the Whole Earth ‘Lectronic Link (WELL), that early internet bulletin board that proved so pivotal in bringing together libertarian economics with techno-utopianists, post-countercultural gurus, cyberdelics, hackers and tinkerers, so on and so forth (for those who haven’t read it, Fred Turner’s From Counterculture to Cyberculture is a wonderful illumination of this history). Like so many others of the Bay Area circles he traveled in, Kelly has also been affiliated with Wired magazine and the Global Business Network, a corporate consulting firm specializing in bringing futurists, forecasters, and the rhetoric of scientific complexity to CEO offices across the world (Douglas Rushkoff has pointed out that Wired is, in actuality, the “promotional arm of the Global Business Network, a fact the publication had hoped to obfuscate).

Thumbing through the pages of Out of Control one quickly finds that Kelly’s understandings of complexity and swarming comes from the organization mentioned in passing by Ronfeldt and Arquilla: the Santa Fe Institute. Nearly each chapter name-drops a researcher from Santa Fe; he describes his interviews with them and his touring of the facilities. 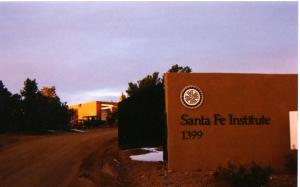 So what is the Santa Fe Institute?

Without going into too much detail at this time, the Santa Fe Institute is a transdisciplinary research think-tank and nonprofit dedicated to the study of complexity and adaptability, centering primarily on social, economic, biological, and computational systems, and the relationships and influences each of these sphere hold on one another. In was founded in 1984 by a group of scientists from the Los Alamos National Laboratory, but the leading luminaries of the organization have included the economist Kenneth Arrow, the innovator of the field of artificial life, Chris Langston, and the theoretical biologist Stuart Kauffman. Kauffman is an intriguing character, having been brought into the world of artificial intelligence research at MIT by Warren McCullouch, one of the earliest cyberneticians in the hey-day of the Macy Conferences and MIT’s relationship to the military-industrial complex during World War 2. Philip Mirowski has observed that the language of finance at times underscores Kauffman’s approach to adaptability in biological systems, as the following quote clearly illustrates:

In coevolution, organisms adapt under natural selection via metadynamics where each organism myopically alters the structure of its fitness landscape and the extent to which the that landscape is deformed by the adaptive moves of other organisms, such that as if by an invisible hand, the entire ecosystem coevolves to a state at the edge of chaos. (Cited in Mirowski “Which Way to Santa Fe” in Interactions in Political Economy, pg. 30)

Langton’s work into principles of self-organization, Mirowski furthers notes, aids this conflation by the utilization of the simulation as an accurate representation of the dynamics of the capitalist marketplace. Both approaches were surely exciting to Kenneth Arrow, who in the 1950s had been bringing into economics the problems of unpredictability, particularly in the context of global, delocalized trading systems. Much of this work took place at the Cowles Commission, located at the University of Chicago (at the same time that Hayek and Friedman were busy stoking the fires of what would become neoliberal orthodoxy), and then later at Yale University. Cowles was subsidized largely by the Ford Foundation and maintained contracts with the RAND Corporation (also subsidized by Ford) – bringing us to a curious historical loop back to Ronfeldt and Arquilla’s own RAND writings. We should also observe that Langton’s forays into artificial life, framing his own work at Santa Fe, derived from his interest in John von Neumann’s preoccupations with cellular automata; von Neumann was deeply interested in the work taking place at Cowles, giving lectures to the economists on game theory and corresponding with them on personal levels. To return to Mirowski again, the intertwining nature of the Cowles with the defense industry, ranging from its personnel to its funders to its contractors, made it clear that the economic research being done on behalf of “the contours of the military’s requirements, coming to terms with operations research, and adjusting to the already existing wartime tradition of physical scientists doing social science at the behest of the command hierarchy.” (Machine Dreams, pg. 256)

Much to consider, much more to come!

5 Responses to Goodbye to Complexity?